The Brown Tree Snake is generally an elusive species within suburban areas, that when provoked will present a spectacular defensive display. The forebody is raised off the ground in a classic “S” posture and is often coupled with striking if intimidated. Conjecture surrounds the toxicity of this species with most reputable authorities regarding it as a minimal risk to all but young children or those with a marked anaphylaxis. As they are rear fanged envenomating bites are rare with medically significant bites very uncommon.

The most common form is upper brown to reddish-brown or even dark orange, with numerous irregular, indistinct darker cross bands. The ventral surface, or belly, presents as creamy, apricot or orange. A slender bodied snake with a distinctly bulbous head, which is well defined from a narrow neck. Specimens in south east Qld are typically dull comparative to some northern localities. Reaches an average length of around 1.2 metres however specimens in excess of 1.8 metres have been recorded. The largest specimen captured by Snake Catcher Brisbane was in Karalee near Ipswich and was 1.88m total body length. Mid body scale rows present in counts of between 19 – 23 rows.

An efficient hunter of small birds and mammals its nocturnal habits see it take both sleeping birds from limbs or nests and nocturnal mammals as they forage. Small skinks also feature in the diet. A 1.4m specimen from The Gap consumed a 250mm Pink-tongued Skink which constitutes a substantial prey item. In Guam, where the species is an introduced pest, prey assemblages have seen Brown Tree Snakes reach proportionately larger maximal size and have had a huge impact on local bird diversity. Females may lay between four to eleven eggs in a single clutch.

Habitat profiles outside of suburban areas consist of a number of vegetation communities including rainforest, woodland, melaleuca swamps and heathlands, wet and dry forest types and rocky outcrops. As its name suggests it is a ready climber spending the majority of its time in arboreal localities.

Around the home it utilises trees, vines and shrubs and will additionally progress along rooftops and boundary fences. It is commonly encountered in roof spaces and elevated localities such a pergola and garage open trusses. It is most commonly encountered after entering the aviaries of bird owners where it devours the caged bird only to be discovered curled up inside the cage it can no longer exit. In some suburbs numbers can be relatively high with one home in Pine Mountain near Ipswich having four snakes under a single insulation batt. A clutch of newly hatched juvenile snakes was found in a bathroom in Indooroopilly having fallen through the exhaust fan immediately after hatching. Eight snakes were captured in total.

Visit our Snake safety around the home pages along with our Snakes around the garden pages provide further valuable information when considering this species and its potential presence around your property. 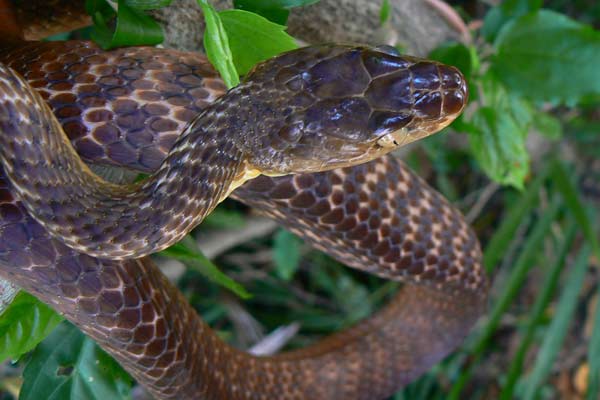