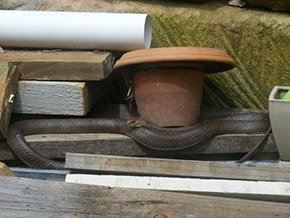 Brisbane Snake Catchers have seen a slower March with a reduction in the amount of snake activity as the weather is starting to cool down. However, the “usual suspects” such as Coastal Carpet Pythons and Common Tree Snakes have still been out and about with the ‘busy’ suburbs for Carpet Python and Common Tree Snake activity including Toowong, The Gap, Mt Crosby, Pullenvale, Brookfield and Ashgrove.

Venomous snakes such as Eastern Brown Snakes and Red-bellied Black Snakes have also still been making appearances with a large Red-bellied Black Snake removed from a drink vending machine at Amberley, Ipswich. A 5 ft Eastern Brown Snake also managed to get itself caught up in bird netting at a property at Brookfield. Luckily, our Snake Catcher was called and arrived in time to free the snake before too much damage was done. The snake survived the ordeal with a few minor scuff marks and was released in a suitable area. Bird netting is very dangerous for snakes and other wildlife and should not be left lying around if it is used, we recommend checking the netting daily to ensure no wildlife has become entangled. Another interesting capture was a Spotted Python captured at Bellbowrie. This particular Spotted Python was rather feisty and gave our Snake Catcher a bit of a hard time!