The Red-bellied Black Snake is generally regarded by most experienced snake catchers as a reclusive species with a quite disposition even when handled, with its apparently fearsome reputation well overstated.. However, when pressed it will inflate and flatten the body and neck in an effort to intimidate a perceived aggressor. It is highly venomous and bites from this species should be treated immediately and attended to with correct first aid.

Being primarily a diurnal species it is an active foraging predator readily seeking out frogs, small mammals and reptiles. The Red-bellied Black Snake is one species that is well documented consuming other snakes including its own kind. Its numbers were reported to have declined in many areas with the main hypothesis presented being the spread of the Cane Toad. Although Cane Toads are to be viewed as a temporary contributor to localised declines the continued modification of suitable habitats has a much longer and more profound effect on individual populations. In actual fact where habitats have remained largely intact or support suitable niches this species has seen an increase in spite of the presence of the Cane Toad.

An easily discerned species it is typically uniform glossy black above along the whole body except the tip of the snout which is paler brown. The ventral or belly surface has a red or pink flush often brighter on the sides & paler in the middle. The hind edge of the belly-scales is black, creating an even red & black striped appearance. In particularly well marked individuals the belly colour is visible along the flanks and sides distinguishing it from the Eastern Small-eyed Snake. The midbody scales present in 17 rows.

At an average length of 1.5 metres the Red-bellied Black Snake is amongst the largest of venomous snakes found in the Greater Brisbane region. Some records indicate the species to grow up to 2 metres in length with the largest record by a Brisbane snake catcher a 1.9 metre specimen from Purga at Ipswich. Other large specimens in excess of 1.8 metres have been recorded from Dayboro, Pinkenba, Bellbird Park, Algester, Forestdale and Warner.

Generally it occupies moist habitats including seasonally inundated alluvial woodlands, the margins and adjacent vegetation around dams, creeks, swamps, lagoons and other watercourses and even rainforest. Within the Brisbane and Ipswich areas it is regularly recorded from St Lucia, Milton, Eagle Farm, Virginia, Murrumba Downs, Albany Creek, Keperra and Karalee but is often locally common in those suburbs supporting riparian habitat profiles.

Around the home the Red-bellied Black Snake is typically associated with ground refugia such as timber piles, sheet iron, rock walls and heavy vegetation. Although primarily terrestrial it has been recorded climbing to take frogs from the eves of homes or use screen doors as a quick escape options from harassing people or pets but this is not commonly seen. Like any snake species it may enter homes where an entry point is afforded. Our Snake safety around the home pages along with our Snakes around the garden pages provide further valuable information when considering this species and its potential presence around your property. 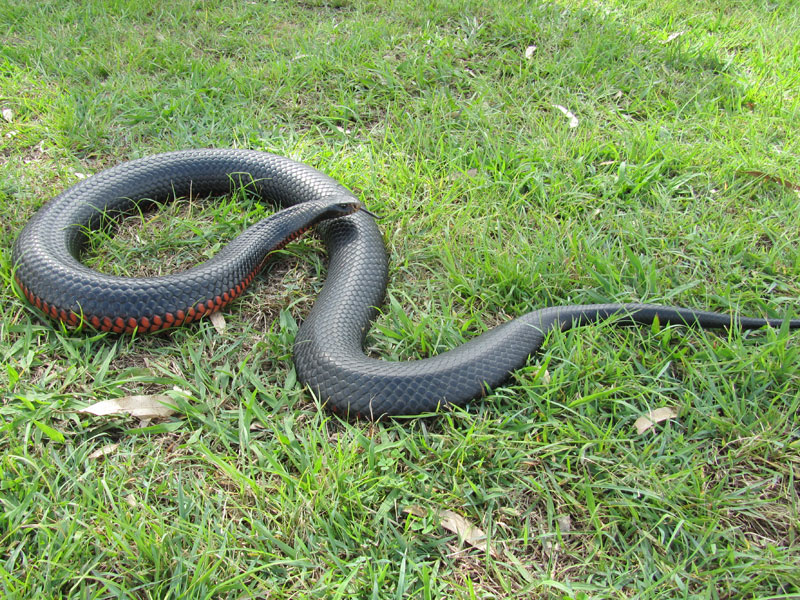