Bardon is located in the foothills on the eastern side of Mount Coot-tha, and is characterised by ridges separated by steep gullies making it highly favorable to Carpet Pythons and Common Tree Snakes. Ithaca Creek, a tributary of Enoggera Creek, drains to the eastern side of Mount Coot-tha and flows through the suburb in a generally north-easterly direction providing a high quality corridor for numerous snake species with both high frequency and high species diversity recorded by the Bardon snake catcher.

Carpet Pythons dominate the snakes captured by the snake catcher servicing calls for Bardon and surrounding suburbs. Typical of those suburbs with leafy canopy structure the Carpet Python is by far the most frequently seen species. As the regions largest snake it is a potential danger for small pets and caged birds. A single Spotted Python was captured of an evening in a Bardon home in 2004. This python species is rarely seen and is presumably at low densities in those localities that afford preferable habitat.

The lightweight Common Tree Snake is often seen moving quickly through vegetation and are also commonly encountered once they have entered homes. Occupy both terrestrial and arboreal niches these agile snakes are a common encounter within homes especially when doors and windows have been left open facilitating entry. The Keelback snake is also a regular within backyards in proximity to the riparian features afforded by Ithaca Creek.

Of the venomous species the Yellow-faced Whip Snake and White Crowned Snake are the most commonly encountered and relocated by the local snake catcher in Bardon. The highly venomous Eastern Brown Snake is very rarely recorded here with less than five individuals captured over a period of nearly twenty years. Occasionally seen is the Eastern Small-eyed Snake, another significantly venomous species. Other smaller snake species captured in Bardon include Dwarf Crowned Snakes and Golden Crowned Snakes.

A full inventory of snakes species relocated from homes over the past 20 years by the snake catcher for Bardon is provided below.

This stunning Common Tree Snake was found chasing a Major Skink around a pool at Bardon. Our Bardon Snake Catcher was called and arrived just in time to prevent the skink becoming the snake’s meal (unlucky for the snake, lucky for the skink). The snake was relocated into suitable habitat nearby. The snake’s colouring is what’s known as ‘Blue Phase’… it’s fairly common and certainly very pretty! 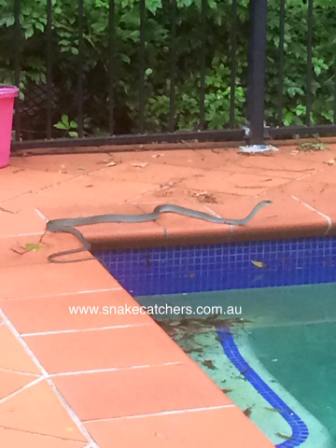 You can’t see me!

This Common Tree Snake had inadvertently made his way into a home at Bardon and found his way into the bathroom. He was trying to hide in a bin when our snake catcher arrived. 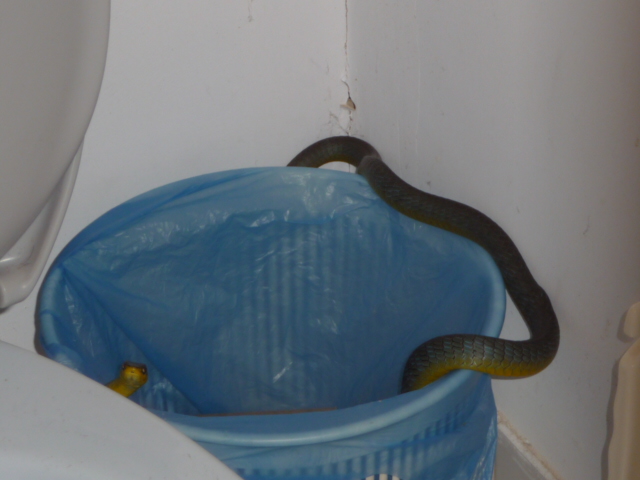 This Carpet Python decided to curl up behind an air-conditioning unit at a property in Tristania Drive and was removed and relocated by our Bardon Snake Catcher. 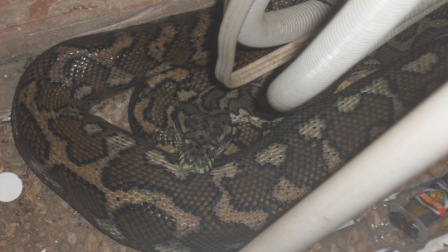 Unusual discovery in a cupboard!

This Coastal Carpet Python was discovered in a cupboard in a residential house on Outlook Crescent, Bardon. The cupboard doors were VERY quickly closed and our Brisbane Snake Catcher was promptly called to catch and relocated the scaly visitor. 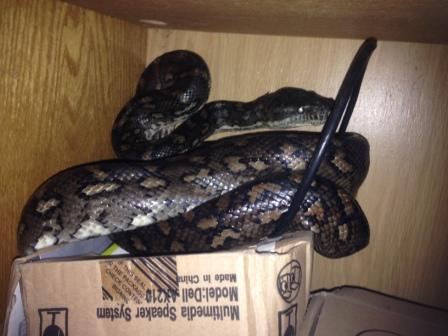 Brown Tree Snakes are active by night and often enter homes via open windows in search of prey. This Brown Tree Snake found itself in a laundry at a residential property in Simpsons Road, Bardon one evening. He was unable to find is his own way back outside and our Brisbane Snake Catcher was called to remove and relocate the snake. Hopefully he continued his nightly hunt without further incidences! 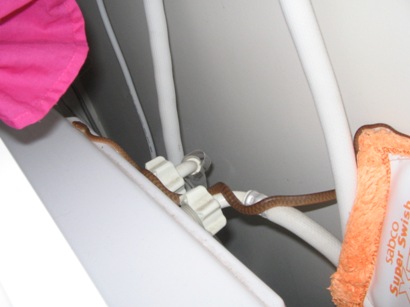 Three for the price of one!

Our Brisbane Snake Catcher was called out to a residential property at Bardon where a snake was sighted in a wood pile. Upon inspection, our snake catcher found not only one, but THREE Coastal Carpet Pythons happily having a snooze together in the wood pile! Aren’t the different colourations and markings amazing, and note the small hatchling likely to have been from the last breeding season. 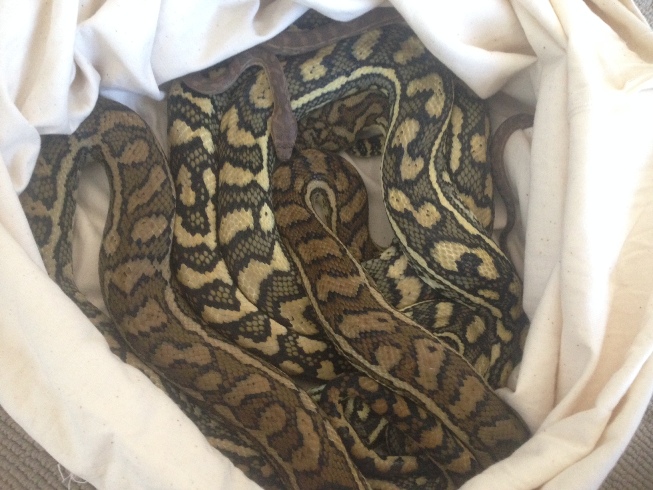