The Gap is one of the more well established suburbs within the Brisbane City Council area that appears popular with many suburban snakes with both high frequency and high species diversity recorded. With local natural features such as the banks of Enoggera Creek, Fish Creek Enoggera Reservoir, Keperra Bushland and the foothills of Brisbane Forest Park these natural assets present diverse habitat types on the doorstep of the many streets, parks and gardens indicative of this suburban landscape.

Carpet Pythons dominate the snakes captured by the snake catcher servicing calls for The Gap. This snake is the largest of all snakes found in The Gap and is by far the most frequently seen species. Its large size and obvious success in the suburban environment make it a potential danger for small pets and caged birds. Common Tree Snakes are often seen moving quickly through vegetation and are also commonly encountered once they have entered homes. Their ability to occupy both terrestrial and arboreal niches sees them a common home invader. Keelback snakes are also a regular within backyards in proximity to moist localities.

Of the venomous species the Yellow-faced Whip Snake and White Crowned Snake are also captured and relocated regularly by the local snake catcher. Appreciable by some would be the low incident rate of large venomous snakes removed from The Gap compared to other areas of Brisbane. In saying that, the highly venomous Eastern Brown Snake does turn up in some of the more open streets where the leafy canopy gives way to a more intermittent woodland habitat type mixed with ornamental gardens. The Eastern Small-eyed Snake is another significantly venomous species that is only intermittently encountered. A number of other smaller more inconspicuous species also call The Gap home with the removal of Dwarf Crowned Snakes and Golden Crowned Snakes an occasional request.

A full inventory of snakes species relocated from homes over the past 20 years by the snake catcher for The Gap is provided below.

Just waiting for someone to turn the heat on! This Coastal Carpet Python from The Gap was impersonating a polar bear and was warmed up before being released by our snake catcher. We estimated it’s body temperature to be around 10 degrees Celsius! 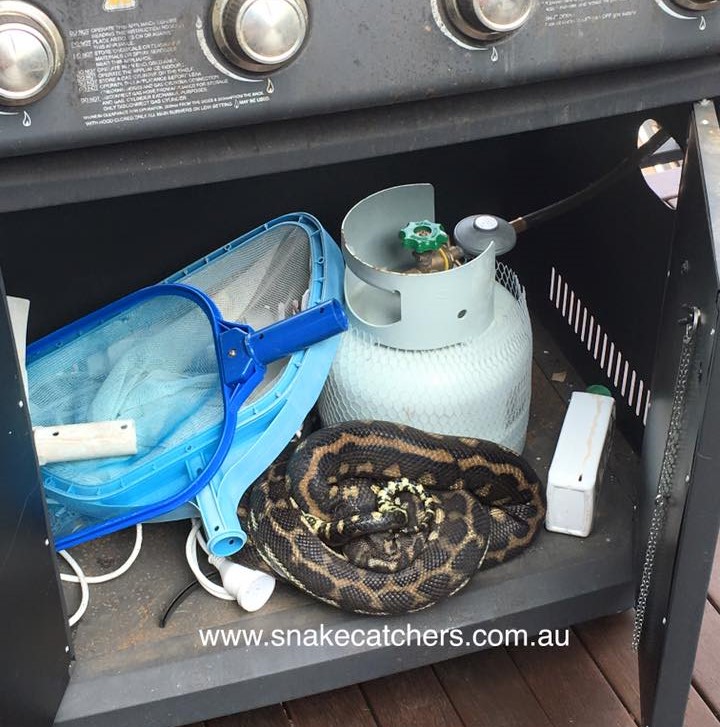 This Coastal Carpet Python (with a possum-shaped lump!) was recently relocated from a residential property at The Gap. The python had ambushed and eaten the possum and then curled up in the garden to digest it’s meal. Possums are a common food source for pythons and a meal such as this will keep the snake content for a few weeks. 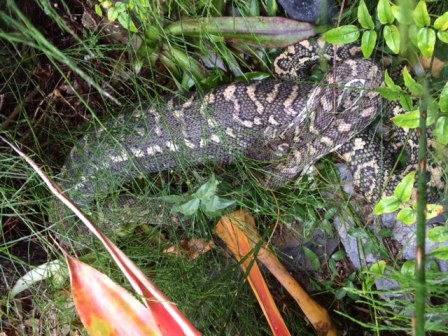 Snakes in the roof

With the weather getting colder snakes are starting to take up residence more in roof spaces. By far the most common snake to be encountered in ceiling spaces are Carpet Pythons. They are generally not too much of a problem (certainly preferable than having a Possum in your roof!) but they can, on occasion, be quite noisy at times and many people prefer to have them removed and relocated. So how can you tell if you have a snake in your roof? Aside from noises and physically seeing the snake, you will often see evidence of snake activity such as shed skins and droppings (scat). This image is of two pythons removed from a roof space at The Gap by our Brisbane Snake Catcher. 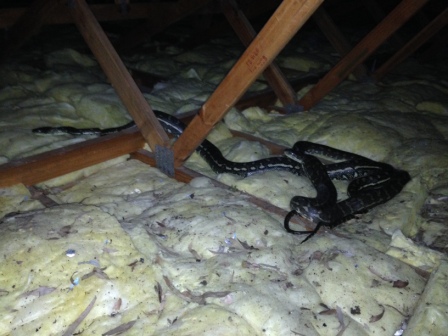 Not a new bathroom fixture

This Coastal Carpet Python was recently discovered in a bathroom at the Gap and our snake catcher for The Gap was promptly called to catch and relocated the unwelcome visitor. 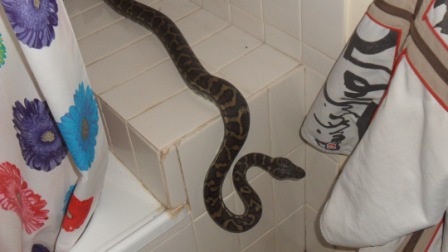 This nicely-patterned Carpet Python was recently removed and relocated from a residential property on School Road, The Gap. It looked like he had just had meal and was certainly intent on pretending he wasn’t there! 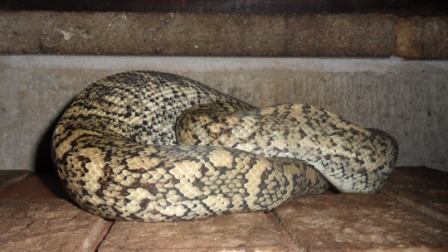 Our Snake Catcher The Gap caught this 7 foot Carpet Snake from Waterworks Road. The snake seems to be doing nothing more than what appears to be “taking a nap”! The resident was doing some gardening, lifted the overhanging vegetation and there tucked away nicely was this little guy. Looks cosy doesn’t he – but try telling that to the next possum he meets! 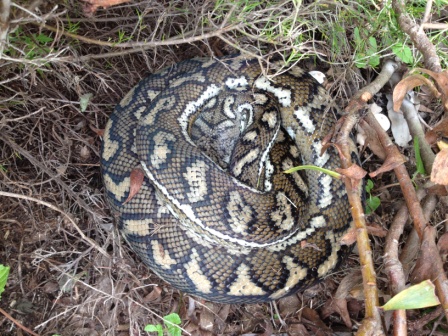 This photo demonstrates a Common Tree Snake’s climbing ability very well! This pretty tree snake was removed and relocated from a property on Hilder Road, The Gap by our Brisbane Snake Catcher. Luckily the snake didn’t venture further up the house wall before our snake catcher arrived! 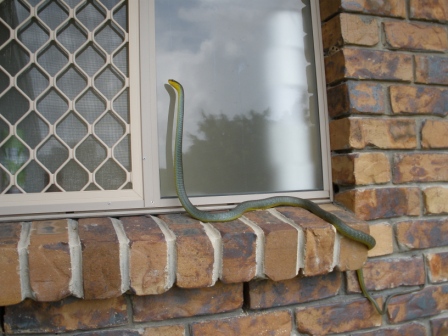 Anyone for a swim?

Coastal Carpet Pythons are often frequent visitors of backyard pools and ponds particularly at shedding time. They will often have a soak in water when it’s time for them to shed their skin. This lovely Carpet Python was picked up by our Brisbane Snake Catcher from a residential property in Moggill Road at the Gap. 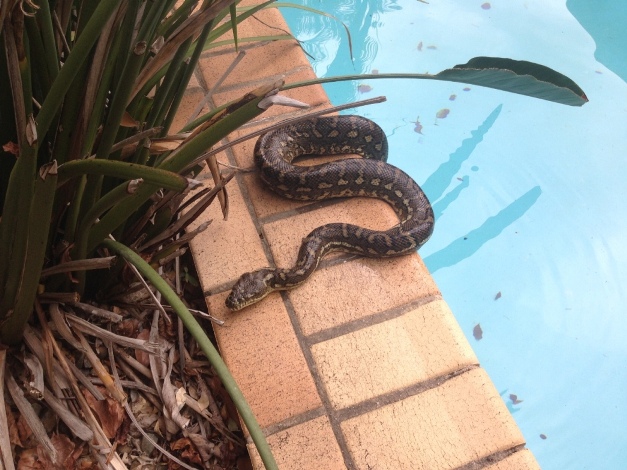 It’s a common myth that Eastern Brown Snakes don’t climb! This Eastern Brown Snake was removed by our Brisbane Snake Catcher yesterday from a residential property in Payne Road, The Gap. The home owner was looking for an item in his garage and discovered the snake among items high on a shelf. It’s always a good idea to be aware snakes may be about and to look where you put your hands. 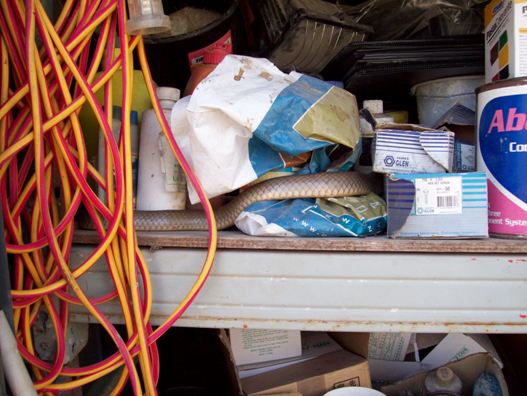 Not what you expect to find when you hear a noise at your front door! This scaly door knocker gave residents at The Gap quite a surprise when they opened their front door to investigate. Our Brisbane Snake Catcher was promptly called to remove the unwelcome visitor. The Coastal Carpet Python was relocated to a bushland area featuring much more natural surroundings to hang out on! 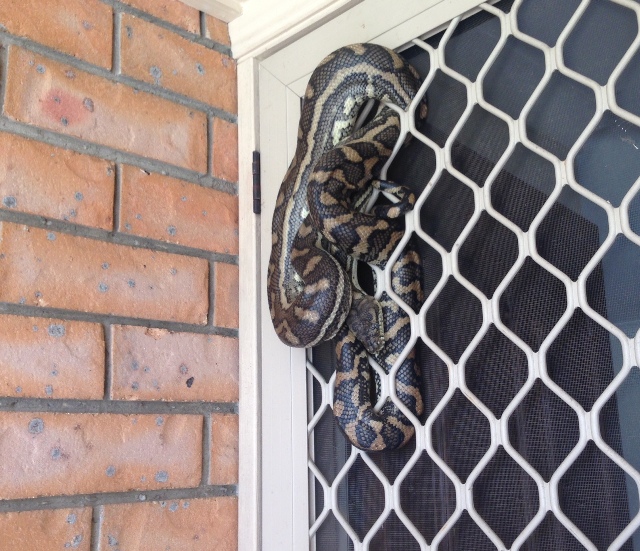