Snakes Around the Garden 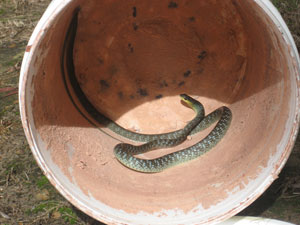 Compost heaps and vegetation piles are frequented by snakes for feeding, refuge and in some species egg-laying purposes. Many of the favoured food items targeted by snakes such as frogs, rodents and skinks are found utilising these localities and in turn snakes are usually not far behind. To reduce the likelihood of creating such a snake haven in your yard you can do the following:

Create a garden which minimises opportunity for snakes

The structure of your garden and the plants within it will often determine the frequency by which snakes are sighted and the suitability of your constructed environment to varying aspects of snake life history. Factors such as tree species, density of shrubs and ground covers, types of mulch used and the frequency of plantings all play a critical part. The key principle is that the more frequent the refugia places the more likely the opportunities for snakes and the prey species they seek.

Snakes such as Keelback Snakes, Eastern Brown Snakes, Yellow-faced Whip Snakes and White Crowned Snakes all favour garden dynamics that provide a high level of cover across a broad area. Snakes in general do not favour being exposed when foraging or even during transient movement between localities. They tend to favour well vegetated routes which allow them to move around relatively undetected. Many ground covers and heavy plantings of species such as bromeliads, dietes, lomandra and Rhoeo create a myriad of ground level hiding localities facilitating concealment. In the case of using such ground cover ensure your plants are well spread out and that these are not allowed to grow directly against frequently used paths. It may be necessary to regularly prune some species to ensure matted vegetation does not become a feature in your garden. This type of vegetation is also highly faired by snakes looking for egg deposition sites and may even facilitate the long term egg maintenance life history of species such as the Carpet Python and Spotted Python.

Shrub selection should always include species which sees branches easily maintained away from ground level or those that naturally grow in such form. Native species such as many Eremophila grow naturally this way. The highly favoured “golden sheena” and ” mock orange” are also suitable and are often used in hedges but these will require regular pruning to about 400mm from the ground to ensure a direct line of sight under each plant. This open structure is not favourable for many of our terrestrial snake species and doesn’t provide for any longer term options for refugia.

When it comes to mulch selection one rule of thumb is applicable; the smaller the mulch the better. Large chip mulches or forest mulch often contains components which are large enough to create numerous cavities that are suitable to even medium sized snakes. These products take a very long time to break down meaning they stay in situ as part of your garden structure longer and therefore any refugia afforded is long term. This is highly favoured by snakes.
Finer mulches such as hoop pine fines or mulches with a composted component are generally made up of elements that are very small and readily break down. The tight makeup of such mulches ensures even very small snakes are not afforded further cover in your garden landscape.

When using rocks or timber in your garden always ensure that no cavities are created or have the potential to form providing further thermally stable localities for snakes. Partially bury rocks and apply mulch types that break down to ensure any movement of the immediate substrate around the structure do not create usable cracks or cavities. Logs used should not contain hollows so the selection of solid timber is suggested. Where cavities occur in existing gardens the implementation of 20mm drainage gravel around the structure will fill in existing gaps and eliminate further gaps being created.

With a few simple modifications to your existing garden and the creation of a new garden with these mitigatory methods in mind you should be able to reduce the suitability of your garden to snakes and subsequently minimise the risk to your family and pets.

Snake Catcher Brisbane consultants provide inspections of yards and homes that can identify all existing localities conducive to the presence of snakes. For your free no obligation quote or to make a booking simply call 0413 028 081.

Rock and sleeper retaining walls create some of the most frequented micro habitats occupied by snakes in Brisbane suburbs. Anytime you place a hard structure such as rock or timber against an expandable or retractable substrate such as soil you will most certainly end up with gaps, cracks and crevices that will not only be present when constructed but will become more frequent over time as the elements take there toll. Suburbs such as Springfield, Brassall, Calamvale, Pullenvale, Eatons Hill and Mango Hill are just some examples of frequent calls to Snake Catcher Brisbane that often entail snakes utilising retaining walls in backyards.

In the case of rock retainers the thermal stability offered by the large rocks and the subterranean labyrinth that is created behind these walls offers increased frequency of refugia localities and an abundance of opportunities for foraging snakes to seek out hiding skinks, frogs and rodents. All species of snakes favour this artificial structure and some of the larger walls could be defined as ” high rise apartment blocks for local snakes”!! A property at Chapel Hill was once attended by our western suburbs snake catcher who records taking sixteen Yellow-faced Whip Snakes and a Common Tree Snake off one rock wall approximately thirty metres long and three metres high!!! Just his year walls at Strathpine and Bardon were found to contain female Carpet Pythons successfully incubating eggs.

Where possible it’s suggested to backfill these walls with 20mm drainage gravel to reduce the frequency of gaps and subsequent suitability for snakes and the food that seek. Products such as Expandable Foam which is available at hardware stores is often useful in some applications also. Generally these walls require regular filling in or maintenance to ensure they remain less favourable for snakes.

Timber retainers are usually made from either hardwood or pine sleepers and also can form excellent places for snakes to inhabit longer term. Timber often cracks or splits creating cavities and the exposure to temperature extremes may also cause walls to warp resulting in further gaps. As for rock retainers 20mm drainage gravel is the cheapest and most effective way to infill gaps created by movement. When constructing retaining walls it’s always a good idea to install a 200mm wide band of gravel directly behind the wall between the timber and the soil substrate. This will minimise the opportunity for gaps to form at a later date. Where cracks are formed by splitting or separating timber, simply infill with a product such as No More Gaps or Expandable Foam.