Kenmore is one of Brisbane City Councils more naturally vegetated suburbs with large retained eucalypts throughout the suburb. This provides a woodland type environment which, coupled with the dense suburban garden structure throughout is highly favoured by some snake species.

Snake Catchers have recorded numerous species with the Kenmore snake catcher referred to by this website having serviced the local community their for the last 19 years. The non venomous Carpet Pythons dominates the captures with the contigious vegetation and easily accessed house roof spaces catering for this, the largest of Brisbane’s snakes. Also at home in roof tops, wall cavities and heavy vegetation is the Common or Green Tree Snake which is also a common snake removed from Chapel Hill homes.

This Coastal Carpet Python was recently relocated from Kenmore. The rather big fellow was doing a great job of protecting the resident’s tools from potential thieves!

Our first female Carpet Python on a clutch of eggs for the season was found at Kenmore. The eggs are being incubated and the female is being treated for some ailments. When she has recovered, she will be released. 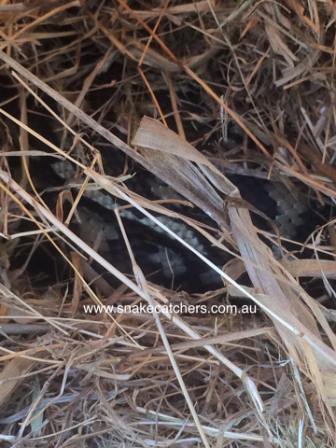 Caught in a sticky situation at a child care centre in Kenmore, this Common Tree Snake managed to get himself stuck trying to pass between two pieces of timber. With a heavy subcutaneous skin worm load the additional width of the snake stopped him in his tracks as he tried to pass through a gap that would normally not present a problem. Our Brisbane Snake Catcher helped him out and released him into suitable habitat nearby where he hopefully won’t find himself in any more strife. 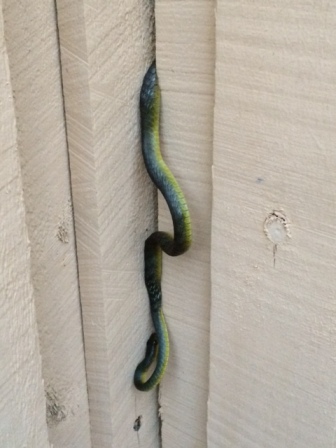 Soaking up some sunshine

It’s a bit of a myth that snakes hibernate in winter. They just become less active but are certainly still out and about – particularly when they day starts to heat up and they are seeking some UV rays. This gorgeous Carpet Python, found having a snooze and soaking up some rays on a veranda at Kenmore Hills, was recently relocated by our Kenmore Snake Catcher. 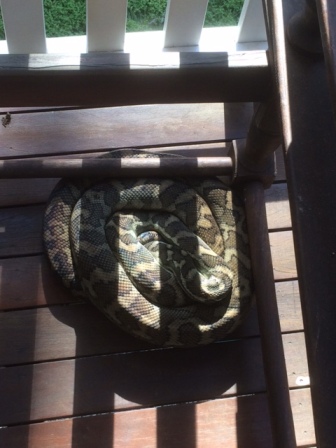 Another Carpet Python out and about in suburban Kenmore! This Python was caught and removed from a property in Gem Road recently by our Kenmore Snake Catcher. Not sure if the scent of the cat scratching post attracted the python but the property residents were grateful to have the snake caught and relocated. 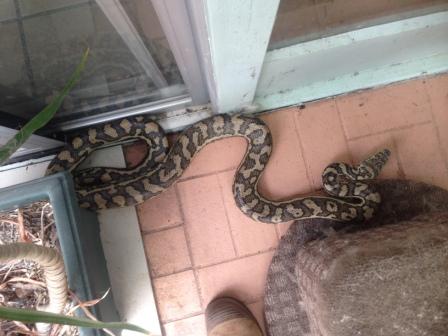 This Keelback Snake was caught and relocated by our Kenmore Snake Catcher from a property at Moggill Road. Keelbacks (also known as Freshwater Snake or Swamp Tiger Snake) are often encountered in moist suburban backyards and parks but this little guy accidently found his way inside a home! Keelbacks have an ability to eat Cane Toads so can be quite handy to have around. 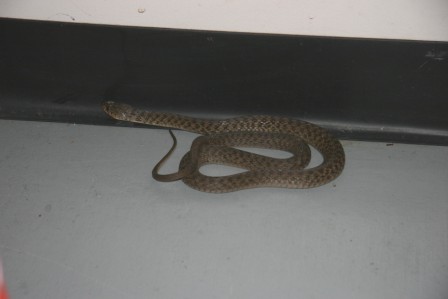 This Coastal Carpet Python ambushed a couple of Brushtail Possums at a residential property in Melinda Street, Kenmore, only to miss the mother possum and take the juvenile possum off her back. The snake consumed the young possum leaving the mother possum a little distressed. The residents witnessed the incident and our Brisbane Snake Catcher was promptly called to attend and catch and relocated the snake. Just a natural predator/prey relationship playing out in suburban Brisbane! 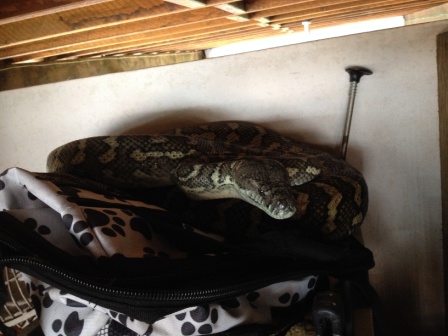 Our Brisbane Snake Catchers are seeing more and more gravid snakes out and about getting ready to lay their eggs. This gorgeous gravid Coastal Carpet Python was picked up yesterday from a property at Wyndarra Street in Kenmore. She was having a chill-out session on the property’s retaining wall and for the residents she was just a little too close for comfort! She was removed by our Brisbane Snake Catcher and relocated to suitable habitat nearby. 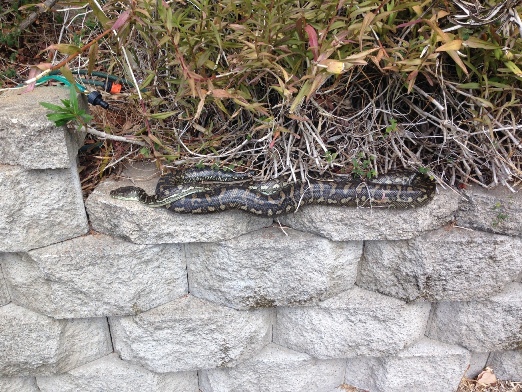 Love is in the air!

These two Eastern Brown Snakes were perhaps getting a little “hot” and sought refuge under an air-conditioning unit at property in Sunset Road, Kenmore. The house owner was not too impressed and our Brisbane Snake Catcher was called to come and remove the two snakes. The pair was removed and relocated to suitable habitat to continue their “activities”. 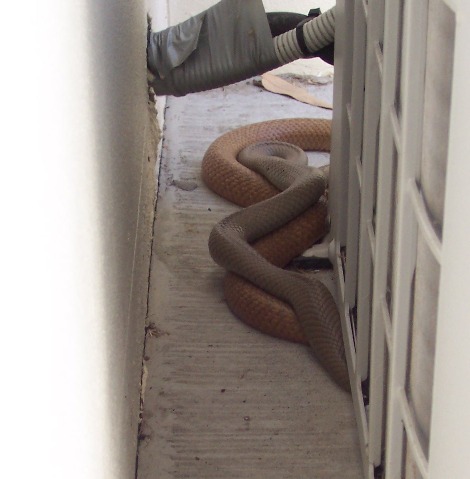