The Coastal Carpet python is the single largest snake species encountered throughout the Brisbane and Ipswich regions. It is non venomous and represents one of two pythons species found in the south east corner. A bite from this species although non envenomating can still cause considerable damage to humans. Armed with 80 backward facing teeth a bite from a large Carpet Python has the capacity to cause substantial lacerations and punctures. In one instance a snake catcher arrived at a Brookfield home only to find a male resident who attempted to capture a 3 metre Carpet Python had been bitten on the hand and was bleeding profusely. The bite had severed a major artery in the back of the hand and caused severe lacerations. A lengthy microsurgery was required. The power of these snakes should not be underestimated and the damage large specimens can cause to pets or people should always be considered.

The Carpet Python is a large, heavy bodied snake with a highly variable, mottled & blotched pattern and color. Mostly white to cream on the underside, the head is distinct from the neck. Deeply pitted scales (infralabials) are present along the bottom jaw and to a lesser extent the upper jaw (supralabials) with small “granular scattered scales on top of the head. Mid-body scales are present in 40 – 60 rows. At an impressive average length of around 2.1 metres and with occasional specimens exceeding 3 metres the Carpet Python is most certainly the “suburban leviathan”. A specimen recorded by Snake Catcher Brisbane from Pine Mountain, Ipswich measured in at 3.9 metres and 14.5 kg! The largest reliable record for the species comes in at 4.2 metres in length.

A highly adaptable species it occupies all habitats from rainforest, wet sclerophyll forests and dry woodland through to suburban backyards and the periphery of highly disturbed farmland. It’s ability to not only persist in the highly modified suburban and rural environment but to thrive throughout, makes the Carpet Python the most commonly encountered snake for residents and subsequently snake catchers. The parallel proliferation and success of native mammals and introduced rodent species in these modified environments has provided feeding and refugial resources at every level for the Carpet Python.

Although active on occasion by day, The predominately nocturnal habits of Carpet Pythons facilitates the stealth and ambush type predatory modes it incorporates when actively seeking its next meal. The preferred prey of this species changes with respect to size of individual animals with juvenile carpet pythons feed predominately on skinks and small rodents such as introduced mice. Sub adult specimens target larger mammals such as rat species, smaller flying foxes, caged birds, guinea pigs and Ring-tailed Possums. Adult animals in excess of 2 metres feed on large prey such as brush-tailed Possums, larger flying foxes and even domestic pets. At this size cats, small dogs, chickens and other poultry are well within the prey range of these snakes. To date the largest domestic animal to be recorded consumed by a Carpet Python by a Snake Catcher Brisbane snake catcher is a 3/4 grown Beagle dog!!

Recorded from all suburbs of the Greater Brisbane and Ipswich regions including the inner city the highest densities occur within leafy suburbs such as The Gap, Keperra, Dayboro, Ferny Hills, Chapel Hill, Kenmore and Chelmer. It will utilise all above ground environs such as roof and wall cavities, exposed beams of verandahs and pergolas, sheds and garages. Often resides in the heavy foliage of trees and shrubs. At ground level will utilise dense vegetation, miscellaneous large ground litter such as stored building materials and accumulated garden debris. Our Snake safety around the home pages along with our Snakes around the garden pages provide further valuable information when considering this species and its potential presence around your property. 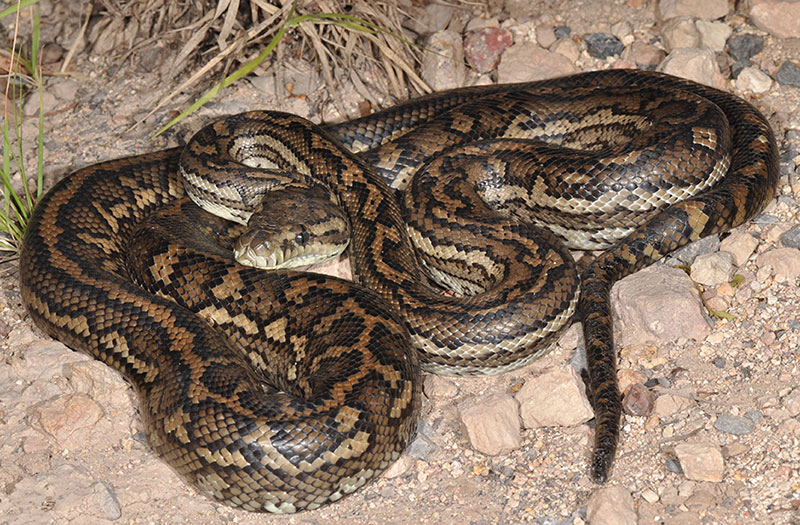