The Eastern Brown Snake is a large, robust, highly venomous, diurnal snake species responsible for more human fatalities than any other snake in Australia. Its alert, yet highly responsive nature ensures that any form of intimidation or aggressive notion towards the snake will result in a spectacular defensive “s” shaped posture. Although this posture is elicited as a defensive response this species will bite if pressed and, as the second most toxic land snake in the world the result for humans or pets can be fatal. It is quick to flee if given the opportunity

The Eastern Brown Snake is an efficient hunter of small mammals and reptiles. In many areas of the eastern states the Eastern Brown Snake has centred its feeding ecology around the introduced house mouse which has been pivotal in its rise as the most commonly encountered of all large venomous snakes around suburban homes. It’s adaptability to changes in the suburban and rural landscapes it occupies has seen it proliferate to a common status across its range with some localities exhibiting almost abundant population densities. Juvenile specimens are feed almost exclusively on skinks until large enough to target small mammals.

This species is amongst the most highly variable in respect to colouration and pattern ranging from pale tan through orange, russet, dark brown & almost black, sometimes with cross-body banding. The belly is usually cream, yellow or orange with scattered orange or grey blotches. Hatchling and juveniles particularly vary in colour, frequently having dark heads or neck bands, or being completely banded along the body length. The midbody scales present in 17 rows.

Average length for the Eastern Brown Snake is around 1.4 metres with specimens in excess of 1.8 metres not common. A specimen of 2.3 metres was recorded from Karalee, near Ipswich in 1999 by the Snake Catcher Brisbane snake removal specialist for the Brisbane West and Ipswich areas. Specimens between 2 and 2.2 metres have been recorded from Dayboro, Karana Downs and Pinkenba.

Around the home the Eastern Brown Snake is often encountered in and around localities with a strong rodent presence such as bird aviaries and stock feed sheds. Due to its active foraging nature it often enters homes through gaps afforded to it by open or gaps under doors. Any ground refugia may be utilised such as timber piles, sheet iron, rock walls and heavy vegetation. The maintenance of yards and the control of spilt seed and other food associated with pets may assist in the control of rodents which this species exploits so well. Although not a recognised climber individuals will forage in elevated localities especially where rodents frequent. Our Snake safety around the home pages along with our Snakes around the garden pages provide further valuable information when considering this species and its potential presence around your property. 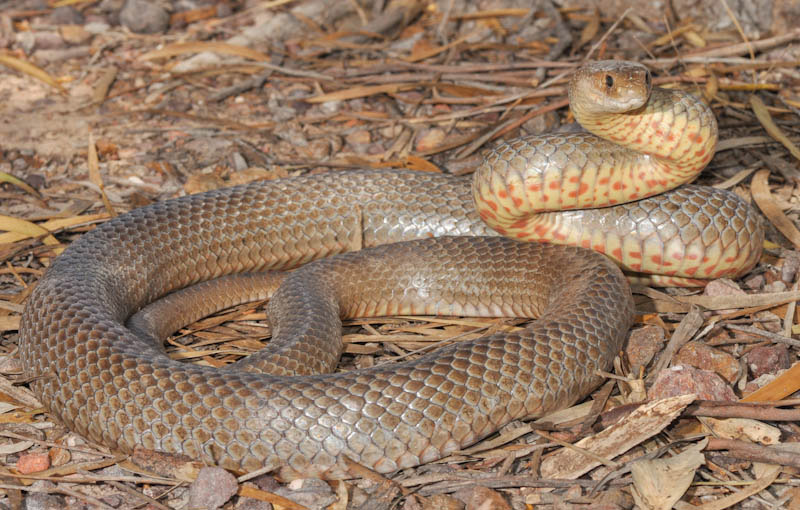