The Yellow-faced Whip Snake is a small to medium sized snake species that is quick to flee at the first sign of a perceived threat. Its defensive posture is to simply pull the head back over the body in readiness however bites are usually only received where direct contact is made with the snake. It is a mildly venomous snake species that, in the case of small children, the elderly or those presenting with an anaphylactic response to its venom may be potentially dangerous. Bites generally involve localised pain and swelling which may extend across a significant portion of the effected limb but more severe symptoms may be experienced. In all cases it is strongly advised that bites be treated with correct first aid and medical attention sought immediately.

The genus Demansia which entails all Whip Snake species have proportionately larger eyes than other snake species making them highly efficient hunters of diurnal skinks and other small lizards. There body slender profile coupled with excellent visual acuity makes them a formidable predator of even the fastest of lizards. These features also serve them well when avoiding predation themselves.

In appearance the Yellow-faced Whip Snake is very slender with a long, thin whip-like tail and distinctively large prominent eyes. Its colour is somewhat variable but generally it is pale olive or bluish-grey, often with a rusty flush or longitudinal stripes along the front-third of its body. The ventral surface or belly is greyish-green, often with yellow under the tail. It has a distinctive facial markings with an obvious pale cream or yellow rim around the eye, with a dark comma-shaped marking curving back below the eye. A dark bar or line with pale edges runs across the front of the snout from nostril-to-nostril. Its scales are smooth with its midbody scales presenting in 15 rows.

The average length for the Yellow-faced Whip Snake is 65-70cm, but larger specimens have been recorded locally. A specimen captured at inside a child’s toy piano Narangba and another from behind a television cabinet in Chapel Hill measured in at 80 cms. Records suggest it may reach a maximal length around 1 metre.

The Yellow-faced Whip Snake occupies numerous habitat types which consist predominately of grassland, open forest, rural and suburban landscapes. It is one of a number of snake species that has managed to proliferate despite the continued pressure of habitat alteration and in some cases the species has been well facilitated by such change. In suburban areas the ever present abundance of skinks on which they predate has seen this species sustained with often high population densities recorded in many suburbs. A property at Chapel Hill was once attended by our western suburbs snake catcher who records taking sixteen Yellow-faced Whip Snakes and a Common Tree Snake off one rock wall approximately thirty metres long and three metres high! Nine individuals were also captured under one large piece of plastic in a Goodna backyard along side an Eastern Brown Snake. Not regarded as a climbing species but it may occasionally climb in search of potential prey. Quick to retreat most specimens are usually seen disappearing into available cover. It is found commonly throughout most suburbs with the exception of the inner city.

Around the home the Yellow-faced Whip Snake is frequently seen and it commonly enters homes during active foraging efforts. It will utilise a range of ground localities for refugia including constructed rock and sleeper retaining walls, under rocks, sheets of iron, timber piles and other discarded human litter. Its abundance and diurnal habits frequently see it the victim of roaming suburban cats. Our Snake safety around the home pages along with our Snakes around the garden pages provide further valuable information when considering this species and its potential presence around your property. 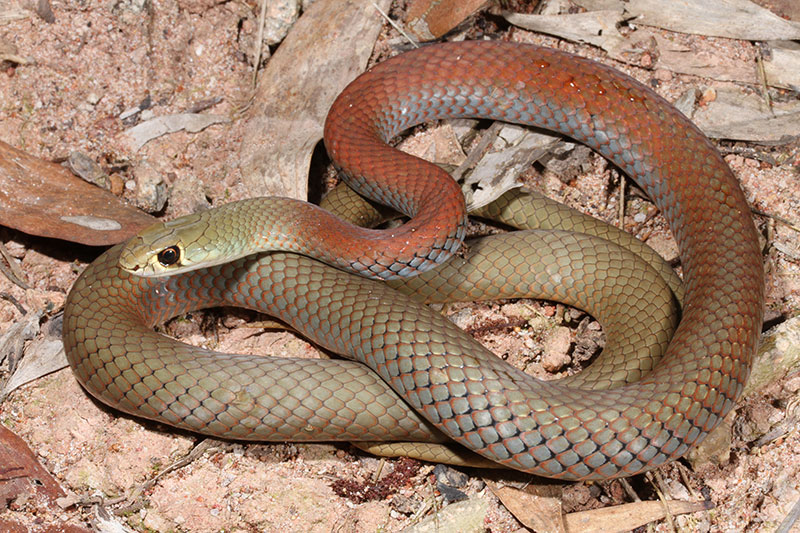